Transcript of Audio Review by One World Music 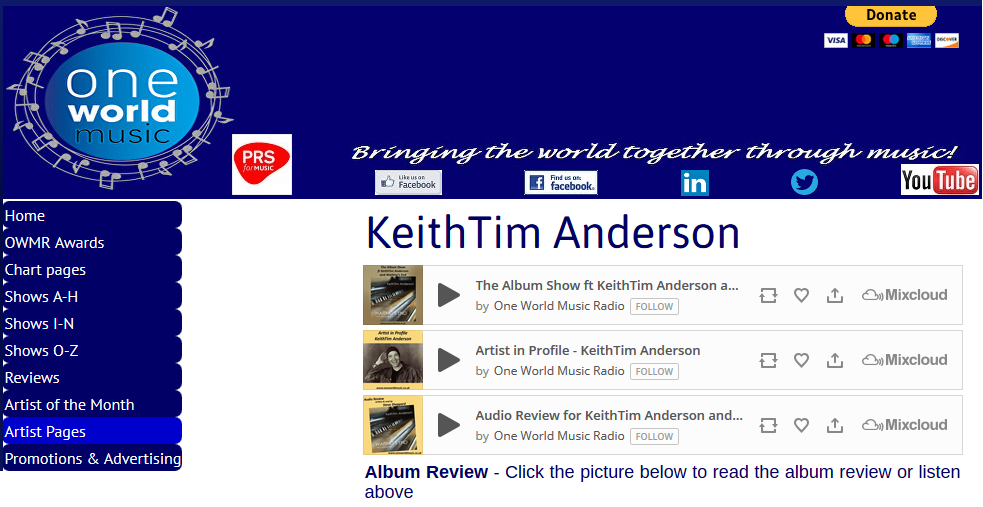 A new artist crossed my path today in KeithTim Anderson and because of this meeting of the musical highways, a brand new and really smooth solo piano album now resides in my collection in the guise of this debut solo piano release Waiting’s End.

Anderson is a story teller, a narrator of fine tunes and within this musical voyage you will find boxes of many memories in our attic of tone and arrangements.
One of the hardest seasons of the year to deal with is autumn, the season of mists, of lengthening shadows, of darker moods, all this is beautifully narrated by the track that opens the album entitled Autumn Rain. The sombre and sensitive performance is indeed like watching the sky cry in late October.

The mood drifts away from retrospection and season and now moves gently toward a lighter feeling of gratefulness, in a track called Here With You. I must say I love Anderson’s style, he has a certain warmth of performance, one that especially can be found right here on this offering.

It is already apparent that KeithTim has a talent for creating great melodies and that doesn’t change, listen to this next piece called Hope Again. This is a fascinating composition, very gentle and almost pristine and delicate in its arrangement, one could almost see a small china doll dancing to it. The tones of the performance seem to give out an energy of future hope within its overall mood and construction; this is a delightful piece.

Last Goodbye is now upon us, the mood has now changed to a mournful repose. The hardest thing to do is to say goodbye, especially for the very last time, something I have done too much of recently. One of the hardest things to do is have the courage to put this emotion into music, and for me KeithTim has not only been successful in capturing this feeling, but has drawn the narrative of it so powerfully, it could well be the sound track for those final moments of farewell for everybody.

We are just about to step over the borderlands of the half way marker of the album, but before we do so, the artist wishes to perform a piece called Long Ago for us. There is a little David Lanz about this offering that I adore, the melody and theme is beautiful and one that is steeped in memory, and of good times.
On the track Photographs we have a really haunting offering, we could for example imagine we are in an old dusty family attic and have just found an album of our families past. The mood in this composition is deeply moving; I actually found this piece really emotional to listen to, it is wonderfully composed with the perfect elevation in power as well when needed.

We are now firmly in the latter half of the album and as we wander through this lush green woodland of music, we come across a stunning offering called Remember When. The performance here is so kindly and warm, one could easily see two elderly people talking to each other on the porch, as the late September sun fades, and he leans into her and says Remember When? This is without doubt one of those pieces you just can’t help but like.

During this musical voyage, we have travelled far and wide and now perhaps it’s time to Rest Awhile. This is solo piano at its best, the style of performance here is like an arm going around the shoulder and saying, just sit and rest for a bit, and then we will move on, everything is fine. KeithTim has the power of narration down to a tee, he plays from the heart and it shows.

We are now approaching the last few tracks of the release and in these deep musical waters we find a superbly fluent offering entitled Someday. A composition of hope and expectations perhaps, but performed with such confidence and professionalism it is a pleasure to listen to, it is almost like an anthem in its increasing intensity at times.

Our penultimate offering is called Somewhere Out There; this is a masterful offering one that plays light and dark with its composition, with the minor and major, creating a questioning mood and suggesting an answer maybe out there, somewhere! The performance here is sublime, some of the best solo piano I have heard for a long while, film score in mood as well.

The very last spot has been saved for the title header; yes we are at that blank canvas called the title track, and as such I welcome you all to the last composition from the album, Waiting’s End. Here is a piece that seems to very nicely sum up the whole album, done with such class and style I may add too, the perfect way to end what has been a wonderfully flowing journey of solo piano.

Waiting’s End maybe a debut solo piano release for KeithTim, but by judging this collection of superb solo piano pieces, I would say he has a long musical career ahead of him in the genre. Anderson really plays from the heart, to the heart, and in doing so touches each and every musical soul along the way, this is one album that will move you and enthral you at every turn with each note played, one you should perhaps add to your musical collections as soon as you can.