Here's the second review of my new solo piano album, Waiting's End, from New Age Music!
Click the photo or the link to below to read the review on their website. 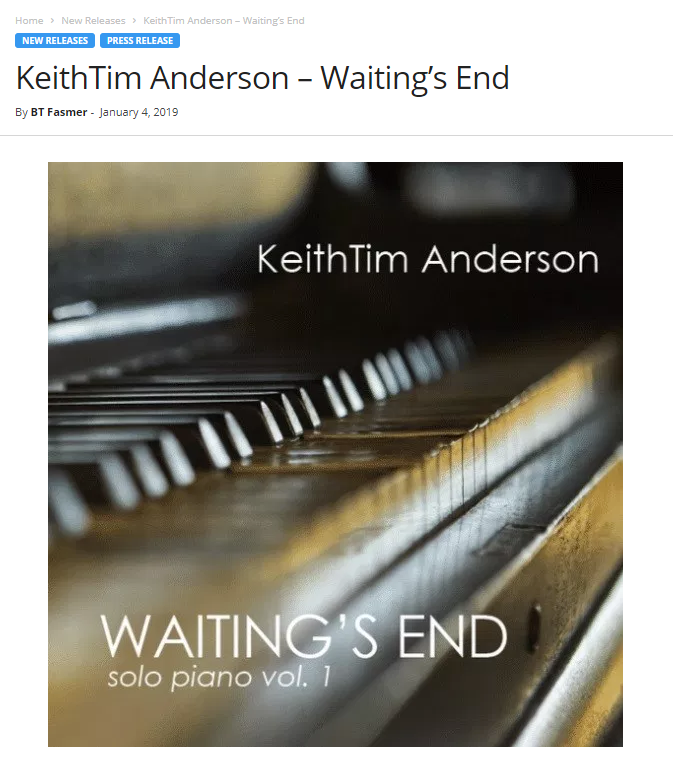 Waiting’s End is the debut solo piano album from singer/songwriter KeithTim Anderson, written after he lost his voice in late 2017, and wanted to keep his creativity flowing. After his voice returned, he felt the need to keep composing on the piano. Consisting of 11 tracks of beautiful, peaceful and deeply restful music, each track on Waiting’s End is distinct in itself in melodic style and its insistent calm. Listeners have referred to Anderson’s music as intriguing, peaceful and inspiring.

While the Nashville based Anderson hopes that every listener can find a personal connection to these songs based on their own life experience, for him, the music, like everything in his life, is grounded in his deep faith. On a previous vocal album called Refuge, he created songs of Scripture and hymn lyrics set to original music. In the packaging of Waiting’s End, he intuitively connects each song thematically to a Scripture related to its title, i.e. “Autumn Rain” with “He gives the autumn rain to show His faithfulness (Joel 2:23b) and “Long Ago” with Genesis 1:1 (“In the beginning…”).

“The album has an overall concept of being healing, calming and reflective,” says Anderson. “Yet in some ways, it is a collection of musical snapshots, each song being distinct from the others, yet cohesive as a whole. One person said that they really appreciate the fact that there aren’t songs that stick out as being too loud or vastly different in nature. All of it reflects my deep commitment to my faith in God. The reason I can create music at all is because He has gifted me in such a way as to be able to do it. So, I want to acknowledge Him in all that I do, think and create.”

Check out KeithTim Anderson’s homepage, where you can purchase the CD and listen to more samples.